“I’m near a giant pile of wool. Near the singing lift.” I’m meeting someone in the Royal Festival Hall, trying to explain, on the ‘phone, where I am.

“Are you near the weird people?”

Eventually, she finds the singing lift and the giant pile of wool and joins me.

Later, we notice a crowd start to form outside the building opposite. They are queuing for the two enormous helter-skelter-y slides that have appeared outside the Hayward Gallery. I nip off to the loo and am informed of the news on my return: the slides are not working; people are getting stuck. We are mesmerised by the sight of the staff trying out the slides. Each is instructed at the top by a woman with a severe bun atop her head and a walkie-talkie in her hand. Each starts well enough, but slows down at the third curve and after slowly inching down to the bottom, is forced to shuffle their way out on their bum. We watch the repeated indignities, silently hoping someone gets stuck, just to see what would happen. Our attention is drawn to the right of the slides, on another of the Southbank Centre’s myriad levels, where a group of people wander aimlessly with arms out, perilously close to the edge. They are wearing what appears to be virtual reality masks. They mill around like zombie robots.

We try to work, but it is difficult with giant slides and zombie robots to distract us. But we manage, because this is London.

The people continue to fall slowly down the slide and, at the time of writing, no zombie robots have fallen off the edge. 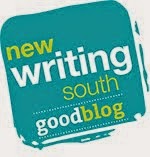